Lisbon is a familiar place for me but unlike the last time it was a sober visit. The previous occasion was for an international game where Poland somehow held Portugal to a 2-2 draw at the Estadio da Luz. It was a hazy evening at best that time so this was going to be one which involved more culture and how best to carry this out than in the usual manner - by trying to visit as many local stadia in one city as possible during the space of my 30-hour stay. The plan was set up virtually to the minute... The excellent Wikipedia gave me a list of teams in the top several divisions and then using googlemaps the distances from my hotel in the middle of the city centre to each club's stadium was calculated. This was eventually whittled down to picking those within a five-mile radius and then in which order they should be visited in. The route created a beautiful "butterfly" effect with the right-wing to be visited on Tuesday - eventually ending at Sporting Club de Portugal's stadium - and the left-wing to be followed on the Wednesday. 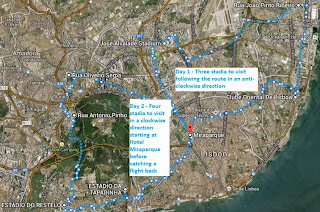 The day of the match started in a disappointing manner with a large cardboard cutout of the Manchester United team greeting me at Heathrow. The whole of my tour was to be carried out using public transport and the bus from the airport to the hotel also passed a strange shop - one that only sold Porto merchandise... in Lisbon! 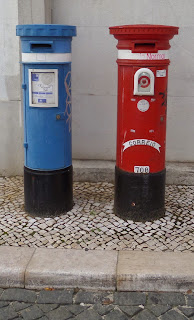 Googemaps had provided me with the exact directions from hotel to stadia by train, metro, bus or tram and the first visit was to Clube Oriental de Lisboa based in the South-Eastern part of Lisbon. It was not an easy place to find - hidden amongst some apartment blocks and on top of one of the numerous steep hills found in the country's capital. At first there was disappointment as it appeared there was no way of accessing the Campo Engenheiro Carlos Salema despite doing a full stroll around its circumference.

Then came the brainwave - simply ask locals how to get in. Easy, the said - ring the doorbell. And sure enough, there actually was a doorbell to where the groundstaff's entrance was and despite the loud barking of a dog 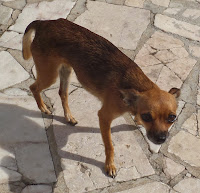 I was given a very friendly welcome. Having been allowed to take photographs of the ground there came the added bonus that sometimes you are given without asking - a full tour of the changing rooms, weights room and an extra special gift - an original pair of player's shorts. 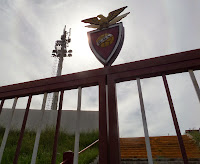 There were some fantastic little bits and pieces. An axe lying on the physio's treatment table which apparently is used as a symbol to remind people when wages need to be paid. 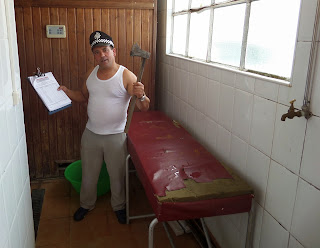 The doctor's room that looked like it had appeared from an hastily made scene from Dr Kildare.

A stadium that like many lower league clubs in Portugal resembles the old West Stand benches all the way round. A sweet team bus adorned in the club's crest and colours.

The whole feel around the area is one of community. A school is a stone's throw away as is a hospital for the seriously disadvantaged. As with Porto, you do not get the impression that people live a life of luxury in Portugal but by the same token you do not seem to see much unhappiness either. Graffiti is communist rather than right-wing of nature. Locals are kind to help with one even escorting me to the local train station onto my next stop as I sweated through the beautifully warm weather.

So onto Clube Desportivo Olivais e Moscavide. This is a club that has been down in the doldrums and although the stadium appears to still exist it has fallen into serious disrepair.

The pitch is more unkempt than Brian Blessed's beard with a man asleep at the table of the bar/restaurant outside the stadium and men resembling drug dealers loitering in the vicinity. A guy on top of one of the floodlights kept shouting at me but when approached seemed to quieten down. Supporter's banners ("Mosca Knights") hung behind the back of the club's offices and it was a sad state of affairs to witness.

The scoreboard was attached to a barn made of corrigated iron behind which a workman's garage was hidden away from view.

I made a quick exit to the metro and onto my third and final destination of the day. Sporting Clube de Portugal based at the Estadio Jose Alvalade.

It was a match which Chelsea needed to win in order to relax for the remaining stages of the group following the disappointing home draw against Schalke. And what a performance to witness. Some breathtaking football and as against Bolton the worry was not about not playing attacking football - it was missing so many chances to absolutely annihilate the home team. Four, clear one-on-ones and again Schurrle spurning an easy tap-in. Nevertheless, three points in the bag with the only blights being an annoying, green laser being shone in the eyes of our players - let's hope this is cracked down upon as soon as possible. Smoking was allowed which annoyed too.

The stadium itself is well-designed and -situated but one of those where seats are multi-coloured in order to disguise emptiness when the ground is not full. It was easy to get to although it did make me chuckle to hear some home support sing, "Super Frankie Lampard" to us in the Metro after the match as if to wind us up - as if! It would be like us singing Ronaldo's name back to them... very odd indeed. Our support sang throughout and although there is no doubt that half were the worse for wear it adding to a cracking atmosphere.
Posted by Valky at 20:12