So that is how fans react when their side comes back from behind, against the odds to defeat a team that only a few weeks ago was being seen as one that may remain unbeaten for the rest of the season. This is how we used to react to great victories against the traditional big sides. We stayed until well after full-time at grounds such as Old Trafford - later learning our lesson that the roads back down South would be clogged up more by their fans than our own - and delay our journey by at least an extra two hours. Oh the irony - this season, it was Manchester United that celebrated their last gasp equaliser against us as if they had won the league. And a side that apparently does not blame referees... unless they draw against Cambridge United (a).

That delirium I feel as a fan occurs when my team battles back from behind. When Chelsea manage to cling onto a victory against the odds. When we are losing but are close to snatching a draw or win. So far this season, this has happened twice - against Tottenham and Newcastle. Even when we were 5-3 down at the 'Lane you felt that we could still snatch a draw. Pulling a goal back against the Geordies brought such adrenalin to the veins that I needed a snooze on the train back to London to recover! Celebrating the goal against Liverpool last week was because we answered the usual bile from the home crowd in the best possible style - by scoring - and somehow held on to an admittedly undeserved draw. We are used to seeing our team win. We also need to face the music when we deservedly lose.

Bradford City earned their victory. The signals were there. Roughly at the time we scored our second goal, the tv display at Stamford Bridge eerily turned from blue into the away colours of the visiting team - a tangerine/orange hue. They scored at the perfect time - just before the break - and could have easily taken the lead earlier had Petr Cech not made a spectacular save. Their opener was a simply brilliant strike from just inside the edge of our penalty area.

Chelsea lacked adventure in the second half and were unwilling to take unnecessary risks. What is unacceptable was the defending that led to their goals. Mikel went off, and without either him or Matic to cover our back four we looked like a pub side. I asked Bobby Campbell what he thought (having had the chance to peer down to him from the West Upper) having been one of the few who stayed behind to suffer in the joyous atmosphere of the visiting supporters. "They battered us," he replied. He was not wrong.

Drogba was utterly woeful with 5 or 6 dreadful choices of pass in the first half. Did we take the game too lightly? Salah was one of the few bright sparks and was strangely substituted. You have to ask why Drogs was in the side at all - will Remy ever be given a chance up front on his own? How will his confidence ever build?

There is still magic in the FA Cup and the draw shall be eagerly awaited tonight. I hope that a few top-tier teams are drawn against each other to give lower-ranked sides a chance to progress. Well done Bradford City, and may you have a good run.

Jose - why is our "B-team" not good enough? I dread to think what happens should three of our normal first team regulars get injured. Or was this reverse psychology into the Liverpool game? More disappointed than annoyed. 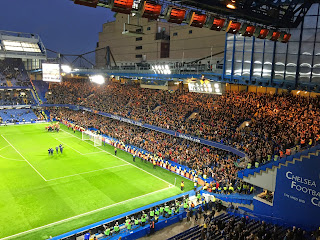