My blood has been boiling for much of the week. Aggressiveness has been at the forefront of my mind and the general tetchy mood began after the Sporting Lisbon game. It was hard to figure out why. Maybe us blokes also get some form of pmt? Maybe it was because of the change in the weather - one of those theories that one's grandma comes up with? Or perhaps it was something to do with work?

No - the answer was simple. Somehow, subconsciously it appeared that this feeling was down to one thing - knowing that this fixture was coming up. The mind picks various moments in one's life to remember - I can vividly recall Dennis Wise hushing our away end that had been kept in after the game in Feyenoord all those years ago and starting a chorus of "Carefree". But for some reason the same cannot be said for performances of Salomon Kalou.

Similarly, certain matches against today's opposition can be remembered and for more negative than positive reasons. The berating of the fans in red towards us for "only winning sh*t cups" in the late nineties. The home crowd cheering the fact that we would not win the league several seasons ago at the Emirates while forgetting the fact that their side could not win any trophies either. The general smugness of that football club is like that of a footballer's wife - one that thinks it is "TFTF" - Too Fit To F*ck while not ever being able to acknowledge its own faults. Such as jeering any club that has a smaller attendance than its own while at the same time forgetting that its own new stadium has the atmosphere of an abandoned warehouse. Even today, one Arsenal fan had the cheek to shout, "south London is sh*t" outside Fulham Broadway while forgetting that its own club's origins lie south of the river.

Let's put all the hatred aside and concentrate on the game. Unlike their football club and their fans we at least can acknowledge good play. In the first half there was no doubt that they posed a huge threat up front. The speed and skill of their attackers made for uncomfortable viewing and had it not been for the experience and positional play of our defence we could have been in serious trouble on several occasions. But they did not take advantage of opportunities they had once in our third of the field. If Schurrle had not made wrong decisions with virtually every key pass he attempted then we, too could have been in a more promising position at the end of the first half.

The simmering in my blood since the visiting fans caused the game's kick-off to be delayed by letting off flares outside the ground (which worked in my favour as I barely made it to the ground on time) was increased to boiling point when Wenger ran towards Mourinho following an admittedly late challenge on Sanchez by Cahill. It is not often that one shouts thing in ire from the West Upper or even stands up unless Chelsea have scored - but in this case I had absolutely no shame in calling for our manager to nut his opponent. It then dawned on me how much this fixture meant to me. And when we won a penalty which Hazard took so coolly in his best game for a long time an element of calm descended on my psyche.

We never felt safe being only up by a single goal but the second half was different. Chelsea tightened up their midfield and once twenty minutes was left on the clock Mourinho changed tactics so that we played in a more counter-attacking manner. And then came the piece de resistance. Having gone through a period following a poor corner taken in front of berating Arsenal fans, Fabregas showed his true quality and placed a through-ball for Costa to score my favourite kind of striker's goal. A run through the middle of the defence beating the offside trap and then an exquisite lob over the oncoming 'keeper to seal the victory. There were light tears in my eyes as yet again Diego cemented my view that he is the missing piece in the Chelsea jigsaw that has not fulfilled its potential over the last few seasons despite still winning so much.

Complete football it was not as this was an Arsenal side that was up for this match and certainly in the first half performed like title rivals. And yet we still won 2-0 by taking the chances that were presented to us. That is the difference against the better opposition this season. And to have Cech as a sub for Courtois! What a game and what a fantastic feeling to beat that team in red. Come on Chelsea! 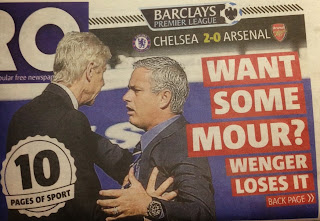