This match was a dead rubber with two-thirds of the game left. It was a world record for how early, 'Olé' chanting had begun - and this was even before the visitors were down to ten men. West Brom were defecating in their pants from the offset, once preferring to kick the ball out for a corner when not under particular pressure rather than take a risk and kick it back to us in open possession. We are on fire in the matches that matter and destroying teams that need to be destroyed.

The difference between this season and last (apart from more "entertainment" value sought by neutrals) is Diego Costa. Can you imagine Fernando Torres finishing with such aplomb as he did on Saturday? To have someone of his calibre up front adds so much confidence to the side - a player who takes his chances; who fights for every ball; who has a deathstare that could freeze hell over. It was also an outstanding team performance and the chances we created were not the odd shot from outside the box, but clear one-on-ones and if it had not been for Ben Foster then this would have turned into a full-scale rout.

Jose's wind-up towards our home fans worked. The atmosphere was much better than against QPR even without any historic rivalry towards the Baggies who barely took up half of their away allocation and decided to come to life only when they saw Ramires warming up near their end. The shame of that draw last year was that it eventually lead to the end of Steve Clarke's managerial career without having done anything particularly wrong. The Baggies lack quality and need that kind of Scottish grimness to lead the charge instead of their current characterless coach. This could provoke players to work hard simply to be able to evoke a smile from his face.

It was damage limitation from the visitors almost from kick-off which exacerbated the deadness of the rubber in the second half while we were saving ourselves for another busy travelling schedule - Schalke and Sunderland in the space of four days (oh, and thanks tv channels for putting the game against The Black Cats at too late an hour to be able to get back to London by train that day). One of their free-kicks taken from the half way line went straight out for a goal kick without touching the ground... memorable for being one of the worst I have ever seen (and having followed Chelsea from the 1980s, their have been a lot from the boys in blue up there during our bad days!) This cued me preparing to leave and go to watch England play Samoa at Twickenham - two birds with one stone.

Congratulations to the lads. Hazard, Oscar, Fabregas, Matic, Costa, Cahill, Azpilicueta, Terry, Ivanovic and Courtois. If there was a gripe it was the attacking play from Willian which again disappointed. At my signal, unleash hell!
Posted by Valky at 20:50 No comments:

So, the atmosphere at Stamford Bridge is not good enough is it Jose? Well that went down well... especially among those of us who follow the club home and away and probably attend at least 75% of the matches plus the odd junior or women's game. So what if once in a while the atmosphere is not some cauldron of noise that intimidates the opposition? What is wrong if the crowd comes to a match expecting you to thrash a team that will not be in this division next season? 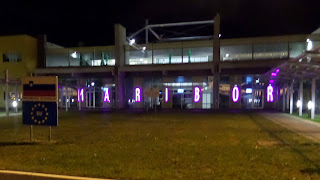 Some Chelsea fans say that ticket prices are driving away those who cannot afford them. Life is expensive, but those who moan seem to have no issues spending £4 on a pint of lager when you can buy a crate of tinnies for £10 from your local supermarket. Life for luxury goods is by no means cheap. I was lucky that my Dad financed my season ticket up until I finished school. And boy was I livid when he told me that we would not be renewing because I would be going to university. Ideal seats in the East Stand Upper Tier were given up. Seating with noone obstructing your view and the only downside being the bloke next to us who smoked two packets' of fags per match and left a pyramid of stubs at his feet. 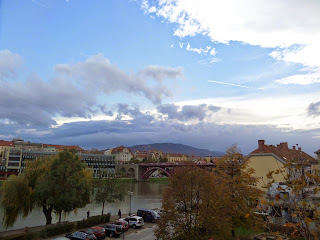 It was because of this that I strived to make sure that in the future I could afford to have a season ticket. That any spare cash I had after all the usual bills could be used to supplement my main hobby - which was following Chelsea Football Club. That was what helped me to be able to afford to go abroad to Maribor. A place which has no direct flights to the UK at any point. A place that has a beautiful, small aiport decorated in the same colours as its football club. And yet only normally has five international flights departing or arriving from its runway each week. In fact, our Sport Options flight and the official Chelsea plane were the only ones using its facilities that day.

The dig at the fans from our manager hurt for those of us who have followed the club since its dark days. Trust me, being at a goalless draw during the winter where you could have read a book from cover to cover and not missed a thing also did not lead to a fantastic atmosphere. But there was that self-deprecating banter that we had about ourselves that I loved. So far this season (especially at the aways) I thought the atmosphere was pretty good. And better than the non-stop monotonous drummer-inspired tosh you hear on the continent. 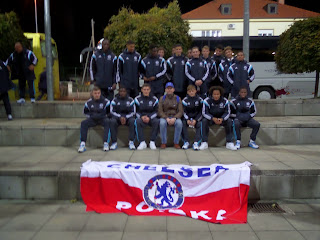 When travelling abroad it is usually the game itself that is the letdown. Maribor is a beautiful town that has a large population of students in the vicinity of the ground. Like many clubs in Europe it is has a generic sporting club there - there were even a couple of old men playing petanque round the back of the ground (sorry if I put them off their throw when snapping a photo) and I spoke to an ex-Judo champion of Slovenia who trains youngsters at the Club. It was when we got to the away end that the real shock set in. If I had had to sit in my seat for the duration of the match then I would have only been able to have seen about three-quarters of the pitch (like at Burnden Park). I could not actually see one of the goalmouths so had to keep moving around during the game to get a decent view. 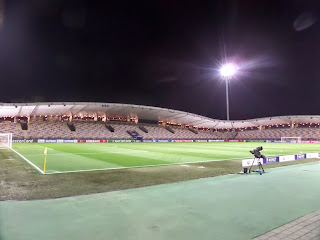 It was fantastic to meet the youth team and some of my old heroes outside the ground before the match. Andy Myers was there and it is good to see an old boy getting involved in team affairs. It brought back memories of players that seemed to have so much promise and yet never quite made it at the highest levels. The likes of Damian Matthew, Jody Morris, Michael Duberry, Jason Cundy and David Lee just to name a few. Those names stick out as you are always on the lookout for a youngster who could make it for the national side as well as your Chelsea side (something Leeds United seemed to try to achieve under the tenure of Peter Ridsdale). 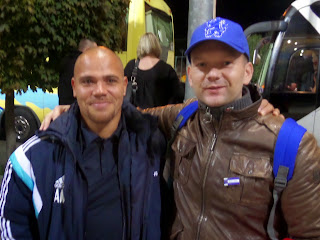 The match was a dire affair with Chelsea well below par. Schurrle annoyed in the first half with hugely inept shooting and we were lucky not to be two-down in the second before rescuing a point. Stats seemed to show that we dominated the match, but the performances from some of our fringe players who must moan at not starting more regularly showed why Jose knows what his best team is. Onwards and upwards... at least we beat Liverpool. 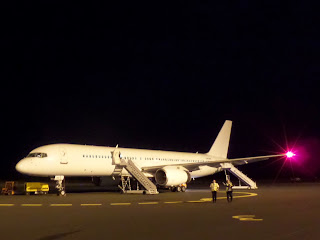 Oh and Jose... we arrived back in Gatwick about an hour before your flight did (I thought about sticking around and giving him a piece of my mind but it being 2am thought better of it) and here was the view from my allocated seat... This is what it is like to be a real Chelsea fan. 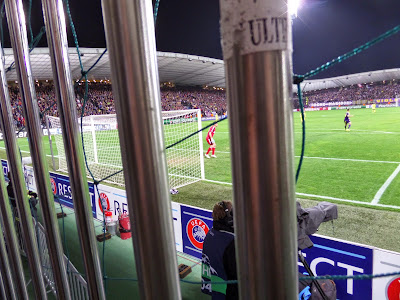