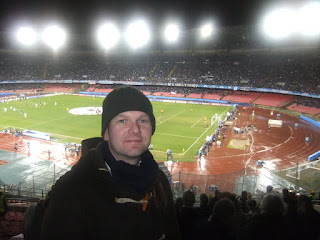 So my first sojourn into Europe for a fair while and it was one that I shall not forget for many reasons.

Napoli is a typical port town… grime mixed with history. From the air Naples looks fascinating – the huge mountains surrounding a seemingly vibrant and green city. The first thing that hits you when you arrive in the city centre is the amount of poverty that lies within. By the city central railway station there were dozens of beggars and drug addicts (not mutually exclusive) on top of the usual dodgy sellers of fake LV handbags littering the streets. I am a Londoner born in the darkest depths of Peckham but this was the first European trip where I felt I had to look over my shoulder at all times.

Luckily my hotel was close to the port and the side of town where more of the posh, boutique shops were located and round the corner from where the Chelsea team were staying. And what a sight I had from my window! A delightful rear view of a block of flats where locals hung their washing out to dry from their balconies when the brochure promised uninterrupted views of the Med…

The only thing that never changes no matter where you go is how you are treated as a football fan – like the absolute dregs of society. We were advised to meet in the port before the match before getting an escort to the ground – the port is several hundred metres wide! An all day session ensued where I bumped into many of the people who I have got to know over the years from my away travels. 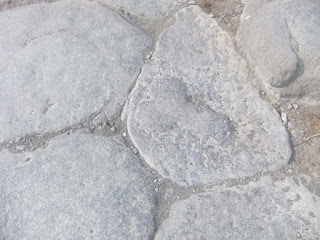 Unfortunately there were also the usual bunch of arseholes who use away trips in Europe as an excuse to sing racist, anti-semitic and loyalist songs that have no place at Chelsea these days. But some simply believe that being abroad means that noone understands English and it is acceptable to chant, “Spurs are on their way to Auschwitz” and so on with no rebuke.

Having spent the bulk of the day in a pizzeria with friends we eventually and reluctantly decided to jump onto the coaches from the port to Napoli’s stadium. Having heard horror stories of what some Chelsea fans encountered (mostly self-inflicted I am guessing) I didn’t want to take a risk of getting the Metro. And what a mistake this proved to be. Not only did I have to share the bus with a minority of the most bigoted arseholes I have ever had the misfortune to come across, but the escort also decided to take a route which was the equivalent of travelling from Central London to Stamford Bridge via Stansted Airport.

The less said about the match the better but it felt sweet to open the scoring from the continually impressive Mata. Quite why Bosingwa started at left-back with a fit Ashley Cole on the bench is anyone’s guess but our defending was simply woeful.

The home fans were boisterous and magnificent – and it was also noticeable that there were more stewards wearing comical, yellow hard-hats in our end than there were in the whole of the rest of the home end! No wonder dozens of flares and smokebombs were allowed to be set off with impunity. The icing on the cake was seeing one of their stewards flicking V-signs towards the away fans continuously throughout the game… this in contrast to a Stamford Bridge where one cannot even wear a baseball cap backwards without being turfed out of the ground.

After the game I did exactly what I was told not to – I returned to the hotel on my own via the Metro and some dark alleyways! And I came to no harm… perhaps too much scaremongering as per usual? 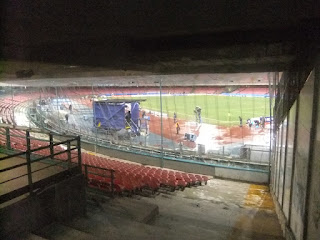 The next day was spent doing the usual touristy things – I decided to go and visit Pompeii which has been left in ruins (sorry). It was fascinating to see how much history there was in this ancient city and what it had been through. The surrounding volcanoes adequately reflect the explosive nature of this city – when I visited there were strikes by rubbish collectors due to the corruption they faced.

It was a memorable trip and the highlight for me was finding a restaurant hidden away in a dark alley which required a buzzer to let you in – and having the best seafood pasta ever for a reasonable price. A good value trip if a touch stressful at times – the only real let-down being the football on display from Chelsea.
Posted by Valky at 12:03 No comments: